Key Peninsula resident Roger Youngchild said he crossed a major item off his bucket list by summiting Mount Rainier at the age of 60 in July.

He was on a short hike near the mountain last summer when he spotted a fork in the road that led to Camp Muir. “I thought, heck, let’s give Camp Muir a try, because I’d always wanted to do it,” he said. “What a beautiful day it was; I thought I could do it without having the right gear.” That spontaneous decision led to an arduous hike that wound four miles through snowfields and gained 5,000 feet of elevation. “That was one hell of a challenge, just to do Camp Muir,” he said.

Although Youngchild said he already accomplished a major goal by reaching the camp, it was a conversation with some fellow hikers that inspired him to investigate the climb to the summit. He contacted Rainier Mountaineering Inc., a guide service that provided him with training, gear rental and expert advice. He scheduled an ascent for Fourth of July 2019, hoping for good weather.

Youngchild said he spent many years running but was an infrequent hiker and decided serious preparation was in order for the long climb. He began setting daily step goals with a fitness tracker and ascending long flights of stairs to build endurance. Over the course of the intervening year, Youngchild traveled throughout the Cascade mountain range, trekking up Mount Si over a dozen times and practicing on summits like Mount Teneriffe and Mount Ellinor. Other training included sit-ups and weightlifting, as well as wearing a 40-pound pack during hikes and exercises. “You’ve just got to be in the best shape of your life,” Youngchild said. “There’s no preparing for the steepness and the cliffs you’re walking on.” 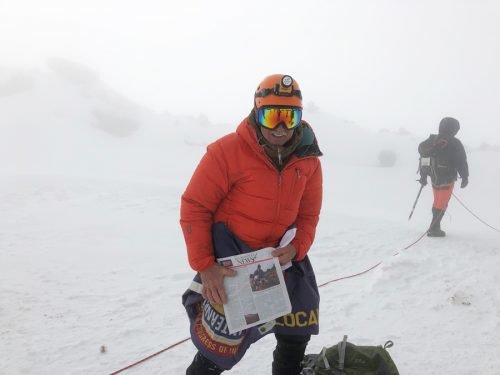 On the first day of the hike up Rainier, Youngchild, his fellow climbers and their RMI guides ascended from the Paradise Visitor Center to Camp Muir, where they stopped to rest. The groups started for the top at midnight, headlamps lighting the way. Although the route Youngchild took from Camp Muir doesn’t require any technical rock-climbing, the trail winds its way through shifting snowfields and up treacherous rock faces.

“It was really something, to do that in the dark,” said Youngchild. “These slopes are amazingly steep, and I was telling myself, ‘I don’t know what you were thinking, Roger.’ ”

The climbers also faced Mount Rainier’s famously temperamental weather, as high winds and snow hampered their progress. “Mountain climbers from around the world train on Mount Rainier because of its nasty weather,” Youngchild said. “(Storms) can come in in a heartbeat.”

Even with precautions and expert training, not every participant was able to complete the journey. From Youngchild’s group of nine, only three reached the top. “It was so hard; when I finally got up there, I fell to my knees and kissed a rock,” Youngchild said. Clouds and snow at the summit kept the group from seeing the view from the top, but they still managed to take a few photos before starting back down. For Youngchild, those photos included a snapshot of himself with a thank-you flag for his wife for her support during the adventure, as well as a photo holding the Key Peninsula News. The group accomplished the 8-mile descent during the remainder of the day, picking their way carefully down the mountain slopes.

While Youngchild is proud of summiting the mountain, he said he felt that he accomplished more than crossing an item off his bucket list. “I cannot express how much I enjoyed climbing mountains and meeting people in that year. It was way more than one day on Mount Rainier, that was really just checking a box,” said Youngchild. “The journey means as much if not more than the summit.”

Eagles and the Genius of Bird Flight

Crabbing Not Likely to Return Near KP in Foreseeable Future

Coho Salmon Season Comes to a Close on Minter Creek