Undated photo of the west shore of Glen Cove with the historic hotel on the left. Orchards extended up the hill behind the house. Key Peninsula Historical Society

Balch’s Cove (misspelled as Belch’s Cove) was still used in reference to the bay for several years after Glencove had become the name of the village. Tacoma Daily Ledger, Jan. 28, 1900, accessed at newspapers.com
Posted Wednesday, November 30, 2022 9:24 pm
From Balch's Cove to Glencove — and Glen Cove

The earliest name for the bay was Balch’s (or Balch) Cove, attested for the first time in an 1884 notice in the Tacoma Daily Ledger and spelled Bolchis Cove. The origin of the name is unclear. It has been suggested that the bay was named for Capt. Lafayette Balch (1825-1862), lumber trader and founder of Steilacoom, but there is no evidence linking him to Balch’s Cove.

In 1891 a post office under the name Balch was established in Balch’s Cove. In 1896, during postmaster Emery J. Hermans’ tenure (1894-1905), that name was changed to Glencove, written as one word, which soon became the name of the community itself, surviving the closure of the Glencove post office in 1924. Hermans is said to have suggested the name change to prevent confusion with another similarly named post office. However, there is no record of such a post office in Washington or anywhere else in the nation at the time, so perhaps the name was changed for no other reason than the locals preferred it to Balch.

The bay itself was known as Balch’s Cove until at least the 1920s, by which time the name of the village had also come to refer to the body of water, written in that case as two words. Although individual usage varies to this day, maps and other official documents use Glencove for places on land, reserving Glen Cove for the bay.

Glen Cove, the sheltered bay up the road from Key Center, is best known today as the site on its northeast shore of YMCA Camp Seymour, where young people have spent summers in the outdoors since 1907. Across the water and a short distance up the hillside stands the historic Glencove Hotel, a three-story Victorian built in the 1890s and restored in the 1970s. The hotel was inducted to the National Register of Historic Places in 1978.

Camp Seymour and the Glencove Hotel are important markers in the history of the secluded cove, but that timeline includes several neglected mileposts along the way to the present.

The first documented visit to the yet-unnamed cove was by a U.S. land office survey crew led by deputy surveyor John J. Lafitte in September 1855. Lafitte was surveying the Willamette Meridian, the all-important north-south reference line that runs through Washington and Oregon and which traverses the Key Peninsula. Lafitte found the land to be “heavily timbered with trees of a very large size,” primarily fir but also cedar, pine, dogwood and maple. Two creeks emptied into the cove at either end of its head, their estuaries forming what he described as an “alder swamp.” The narrow bridge on present-day Cramer Road NW near Camp Seymour crosses the one remaining creek.

Lumber companies were the first private owners of much of that heavily timbered public land. Shoreland logging was straightforward and lucrative: logs were skidded and dumped in the Sound, assembled into rafts and towed to a mill. In 1870 Pope & Talbot, a large company that would end up owning 106,000 acres of timber in Puget Sound by 1892, paid cash for 175 acres south of the entrance to the cove. In 1872 a smaller outfit, Renton & Smith, followed suit, picking up 180 acres on both sides of that entrance.

No pioneering settlers are documented in Glen Cove until the 1880s, a decade that saw an explosive growth in the population of the county and the territory, admitted as a state in 1889. In 1882 William T. Rains of Tacoma purchased 33 acres on the cove’s northeast shore; a year later, in 1883, Joseph W. Reed filed the first homestead claim on 173 acres on its west and north sides that stretched from the waterfront and up the hill to present-day Key Center and the Key Peninsula Highway. There would later be more homestead claims on both sides of the cove, but Reed’s was the only one with access to the bay.

The names of Rains and Reed have been forgotten, but their claims are part of Glencove’s history.

In 1896 Rains sold his land to wealthy Tacoma investor and avid outdoorsman William W. Seymour and his wife Emily, who also loved being out in nature. In 1907, the Seymours offered the Tacoma YMCA use of their bayside property for a summer camp, formally gifting it to the organization in 1920. The camp was officially dedicated in June 1927. The News Tribune reported that it included 18 buildings, among them a large lodge, an administration building, a boathouse, and eight cabins.

Across the bay, Joseph Reed would also eventually sell portions of his homestead, and part of that land is where the Glencove Hotel stands today. The names of Henry (Harry) Winchester and Agnes and Hans Nicholas (Nick) Petersen figure prominently in this part of the story. 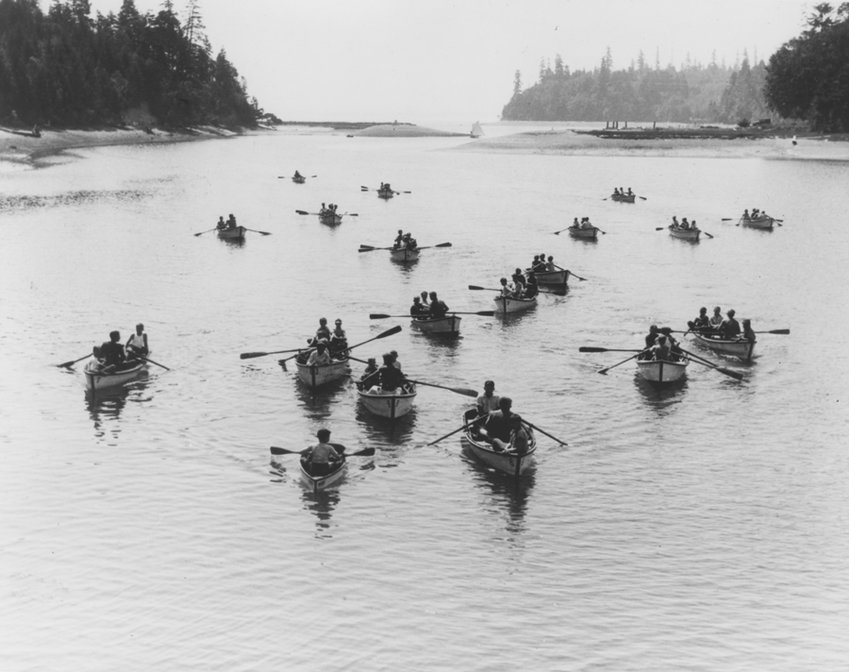 Harry Winchester had sailed to British Columbia from his native England in early 1866, a carpenter on the British Navy ship Clio. After a few years in British Columbia, Winchester moved south to Kitsap County and after 1884 we find him in Pierce County running a floating logging camp. In 1888 he became co-owner of the steamer Messenger, and he would be known as Capt. Winchester for the rest of his life. He sold the Messenger shortly before it was destroyed by fire in Tacoma in 1894.

In Pierce County, Winchester met Nick, a German immigrant, and his wife Agnes, born to German parents in Nebraska. The trio would become lifelong friends and business partners, operating the logging camp and hiring themselves out on logging contracts around the Key Peninsula, with Agnes working as the camp’s cook.

In the late 1880s Winchester and the Petersens took on a contract on the shores of Glen Cove, then known as Balch’s Cove (see sidebar), where a post office would be established in 1891. Winchester came to own 40 acres of Reed’s homestead. In 1892 he partitioned the parcel, selling a roughly 30-acre section to Agnes Petersen for $2,000 in December of that year. It is on that parcel that Nick and Agnes went on to build their elegant three-story house around 1896, a house they shared with Winchester until his death in 1909.

To supplement their income the Petersens started taking in boarders; in a few years they were running a successful seasonal resort hotel. Agnes’ warm hospitality became legendary, and guests were treated to her unparalleled cooking — her roast chicken and homemade German noodles were much in demand. Meals included fruit and vegetables that Nick grew in their large orchard and garden. Among the hotel’s regular visitors were the Seymours, who chartered a boat with friends from Tacoma or took the steamer to Gig Harbor, riding their bikes to Glencove on what Emily Seymour would later describe as “a pleasant ride through the woods.” 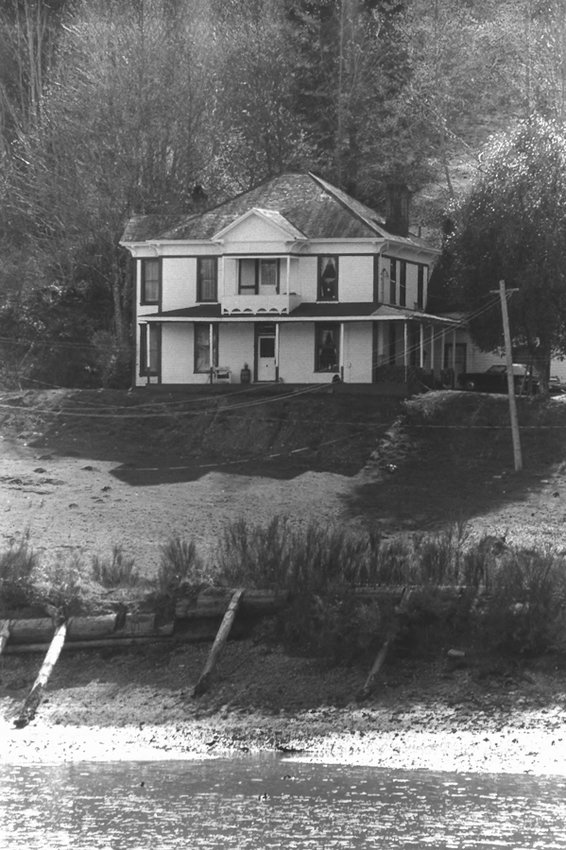 A photo by historian Cyrus Happy of the Glencove Hotel in 1976, soon after it was acquired by Larry and Luciann Nadeau and before it was restored. The hotel had been used as a private residence for several years.Courtesy Marty Happy Behnke

By the early 1900s Glencove was home to several households, as Floyd Oles describes in his 1986 memoir “Glencove: Scenes From a Puget Sound Boyhood.” Oles was 9 years old when the family moved to Glencove in 1905, where they would stay until 1910. In addition to the post office and the store there was now a schoolhouse for the community’s children, on the hillside north of the Petersens’ property. The original schoolhouse was eventually rebuilt and is still in existence, now used as a private residence. Oles’ memoir is rich with snapshots, some sentimental but all informative, of growing up in Glencove, of swimming in the bay, or exploring the woods with his playmates, a group that included the daughter of an Indian family nearby.

Winchester and the Petersens continued to be the main characters in the story of Glencove, helping the community establish itself. The opening in 1902 of the first road connecting Vaughn and Glencove and the construction in 1906 of Glencove’s community hall are two examples of their civic engagement.

The Vaughn-Glencove road was the result of a petition to the county by Nick Petersen, approved by the county surveyor on the grounds that there was “no other road … of equal utility for the citizens residing in the vicinity of said proposed road.” Designated as County Road 624, the road followed 92nd Street NW starting at Lackey County Road, continuing east up and over the hill across Key Center and then down Cramer Road NW, turning right at the bottom of the hill at Glencove Road and terminating at the sandspit where the post office was located, for a total distance of just over two miles. At the time Winchester was serving as Pierce County commissioner, a post to which he had been elected in 1900 and then again in 1902 on a platform promising better roads, so he undoubtedly supported or may even have suggested Petersen’s petition.

The Glencove community hall was built in 1906 thanks to a successful effort led by Agnes Petersen. As places for entertainment, performances, lectures or just socializing, community halls served an important function in the peninsula’s isolated communities. The cost of building the hall was to be covered by contributions of money and/or labor. 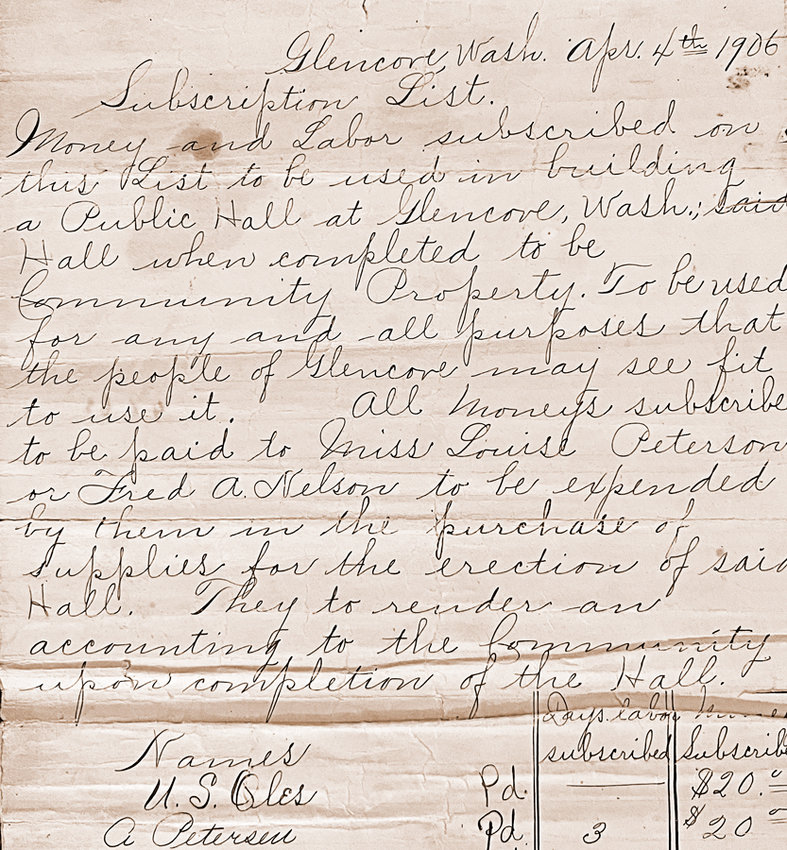 The minutes from a 1906 meeting about the new Glencove Community Hall listed U.S. Oles and Agnes Petersen as the first subscribers.Key Peninsula Historical Society

The Key Peninsula Historical Society’s archive has preserved a large cache of documents relating to the hall, including what appear to be notes from an organizational meeting dated April 4, 1906, with the names of the first subscribers and their contributions. Floyd Oles’ father, U. (Ulysses) S. Oles, who paid in $20 (about $600 today), tops the list, followed by Agnes who also contributed $20, but added three days of work.

The hall was located on land owned by the Pomeroy family to the west of the bridge over the creek at the northeast shore. In 1920, as the community was preparing to formally organize the Glencove Community Hall Association as a nonprofit corporation, Agnes bought the part of the land, about a tenth of an acre, where the hall stood, from Christina King Pomeroy for $15, donating it to the association in 1922 for one dollar when that entity came in existence.

Agnes died in 1931, but her granddaughter Agnes (Aggie) Whitmore continued her grandparents’ tradition of generosity. By 1957 the building had fallen into disrepair, leading the association to vote to put the property on the market, turn the proceeds over to the newly organized Key Peninsula Civic Center Association, and dissolve the corporation. Eager to help, Aggie, who was also secretary of the association, paid the appraised price of $600 in October of that year, helping fund the civic center. 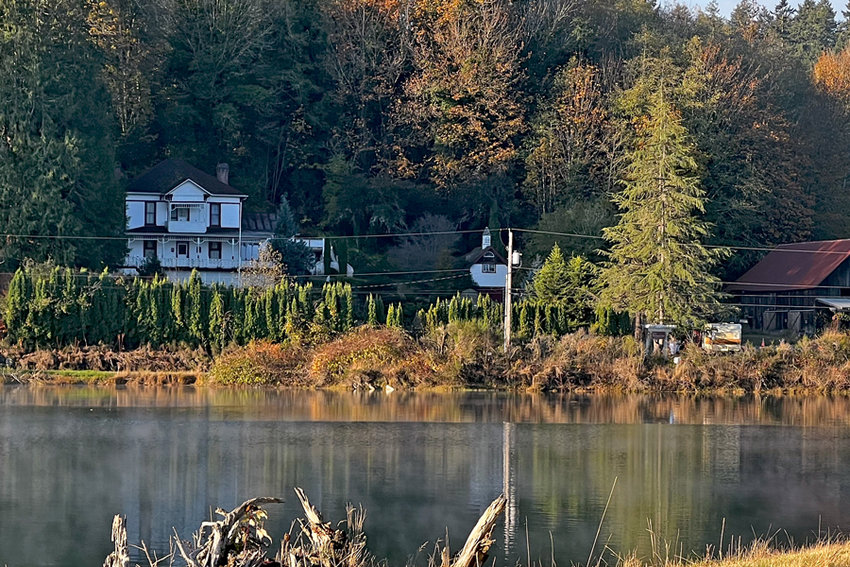 The story of Glencove would not be complete without mentioning Larry and Luciann Nadeau of Gig Harbor, who purchased the hotel, which by then was used as a private residence, in 1975 and lovingly restored and operated it as the Olde Glencove Hotel for decades. Larry passed away several years ago; Luciann died in October.

The historic hotel is quiet now but still graces Glencove, much like it did almost 130 years ago. And thanks to the Nadeaus, who helped add it to the National Registry of Historic Places, it is now part of our national heritage.

Agnes and Nick Petersen and their good friend Harry Winchester would be proud.

About Ed Ricketts: A Cannery Row Character on the KP (Maybe)

The Fourth Purdy Bridge: A Design for the Ages

A New Day for Lakebay Marina