Of Roads and Bridges: The Third Purdy Bridge

In this second of a three-part series we learn that barely 15 years after it was built, the second bridge at Purdy had become obsolete.

It was 1919, and the age of the automobile was in full swing. The nation’s rural roads and bridges, until then built for and used primarily by farmers, were gradually catching up with the requirements of a car-based economy.

Washington was no exception.

In 1906, at the dawn of the new century, there were 700 cars registered in the state; by 1919 that number had grown to almost a million. Automobile clubs were busy organizing weekend jaunts to the countryside, and advertisements for the newest models appeared regularly in the pages of newspapers. There were even car rentals: in July of that year the Tacoma Garage advertised “fine automobiles offered for rent without drivers” that could be rented by the hour, day or week.

In the spring of 1919, Pierce County inaugurated its long-delayed ferry service from Tacoma to Gig Harbor and from Titlow Beach to Wollochet, generating great excitement. “This is the season when dreams come true,” the Bay-Island News, the precursor to the Peninsula Gateway, wrote in March of that year. Arriving motorists would benefit the area’s economy, whether in town for a day visit or on their way to tour the country to the west.

And by 1919 the Washington legislature had begun to allocate to counties the state’s share of funds that Congress appropriated in the Federal Aid Road Act of 1916 to help with the construction and improvement of state highways. Washington’s Permanent Highway Act, passed in 1911, had transferred responsibility for the construction of many county roads to the state, to be paid with tax levies. The federal government’s assistance was instrumental in accelerating the pace of those projects. 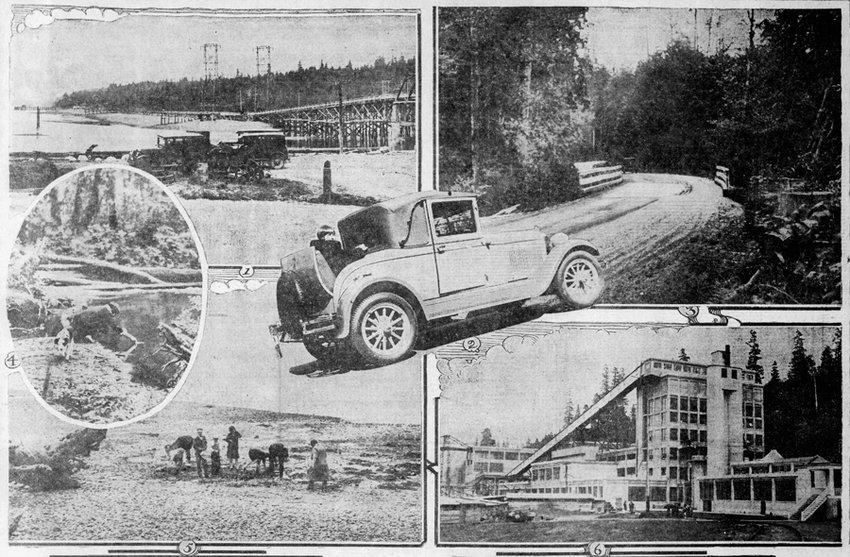 A view of the 1921 Purdy bridge, upper left, in a photomontage published August 7, 1927.TACOMA DAILY LEDGER, VIA NEWSPAPERS.COM

The rapid developments in transportation and infrastructure had a profound effect on the farmsteads and rural communities of the yet-to-be-named Key Peninsula, which quickly became popular touring destinations. Even at the leisurely 30-mile-per-hour speeds reported on gravel roads, the peninsula’s quaint hotels and resorts and even more distant destinations like Hood Canal were now a relatively short day trip from Tacoma and Gig Harbor. Travelers no longer had to rely on the steamers of the Mosquito Fleet, which were slowly losing out to ferries and the automobile. In the Oct. 17, 1919, edition of the Bay-Island News, Edith Delano, the owner of the Delano Beach Resort and Hotel in Lakebay, credited the Tacoma ferry for what had been her busiest season in many years.

Even though it had only been built in 1905 when it replaced the original bridge from 1892, the narrow drawbridge at Purdy and its manually operated swing span already belonged to the past. With money now available for road construction and plans in place for a state highway from Purdy into the peninsula, Pierce County could use its own funds to build a new, wider and sturdier fixed-span bridge to accommodate automobile traffic. There would also no longer be a need for a bridgetender to open the bridge whenever a boat needed to pass through.

This time the county commissioners decided to be proactive and discuss their plans for the road and the bridge with the community.

A notice in the Nov. 16, 1919, edition of the Tacoma Daily Ledger announced that a hearing to discuss the proposed twin road and bridge projects would be held on the Orcas, the county engineer’s boat, on the Springfield side of Henderson Bay; the old name for the town continued to be used for several years after the post office was renamed Wauna in 1906. The county’s plan called for a single, 100-foot fixed steel span with a clearance of 18 feet above high water to allow the passage of marine traffic.

No record of the meeting has survived, but by March 26, 1920, the design was finalized. On April 5 the commissioners issued a call to contractors for road construction consisting of “clearing, grubbing, hurdles, pile and brush bulkhead, grading, draining and surfacing with gravel” and for “one Howe Truss bridge, (concrete) piers and approaches.” Invented by American architect and bridge builder William Howe in 1840, the Howe truss was a lattice of vertical, horizontal and diagonal members and was popular in the late 1800s and early 1900s and can still be seen in many historic bridges. The spans of the 1892 and 1905 Purdy bridges had also been Howe trusses. 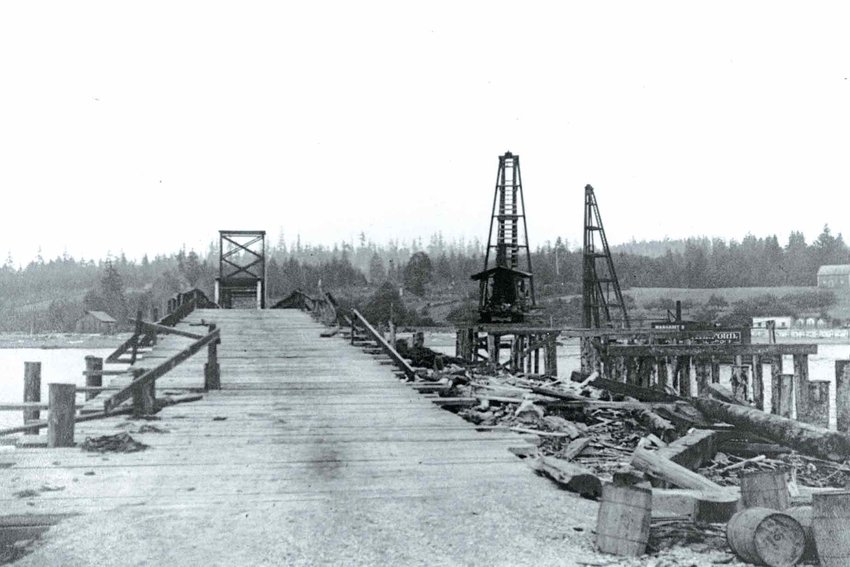 The third bridge under construction in 1920, south of the old bridge. Two pile drivers working on the new bridge can be seen on the right. This view is from Wauna looking east. Courtesy Harbor History Museum

The contract for the two projects went to the Rutherford Pile Driving and Construction company of Tacoma for $82,200; Rutherford was also awarded the contract to build a concrete wharf in Longbranch.

By the summer of 1920 the road on the sandspit was widened to about 22 feet and raised several feet, and two pile drivers were at work on the new bridge.

Construction continued for the rest of the year. Motorists still detoured north through Burley and then back south to Springfield/Wauna; the Tacoma Daily Ledger warned them that the 2.5-mile stretch from Burley to Springfield was “very rough.”

While the county’s design for the bridge called for a steel truss, a departure from the wooden structure in the two earlier bridges, engineering drawings of the bridge from 1936 mention a wooden truss. That may support anecdotal and undocumented accounts of objections by locals to the look of the steel truss, said to have been brought in from Puyallup, which may have forced the county to switch to a wooden structure.

By January 1921 the bridge was finally completed. The old structure, left up during construction, was not condemned and taken down until a year later, in February 1922, and the lumber was used for a bulkhead along the spit.

Work on the road was still ongoing, however. On January 21, the Bay-Island News complained that the bridge would stand in “solitary grandeur, a picture on the landscape, since the roads to either approach have not yet materialized.” A winter storm a few days earlier had washed out a large portion of the road on the sandspit, and there was yet no proper connection of the eastern approach to the road to Gig Harbor a few hundred feet away. “Speed up, Mr. Commissioners, cut out the fooling and tend to business,” the article concluded. “Don’t make us feel like we had used poor judgment when we voted for you.”

That work was completed by March, and the bridge and the new road were open to motorists.

And they were enchanted. A reporter out on a Sunday outing in a Maxwell automobile from Tacoma to Hood Canal by way of Gig Harbor commented admiringly on the “splendid bridge over a branch of the sound … at Wauna,” adding that “(the) bridge is substantial and beautiful, and it offers one of those views of saltwater that never grows old to the resident of the Northwest and that invariably enthuses residents of sections far removed from the ebb and flow of the tides.” 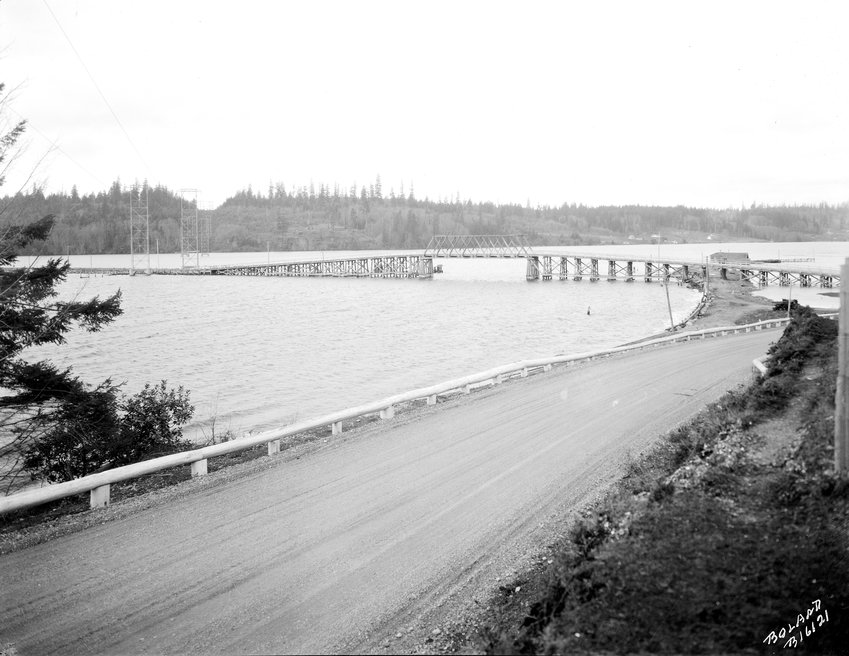 1926 photo by Marvin D. Boland of the third bridge over Henderson Bay, completed in January 1921. The first phase of the Potlatch (Cushman) transmission line was completed in 1926; the four towers are on the left.Washington State Historical Society

A 1926 photo by Tacoma photographer Marvin D. Boland, known for his images of industrial and other man-made structures, shows the bridge viewed from a short distance south of Purdy. That same photo documents for the first time the four towers carrying the Potlatch (Cushman) transmission lines built by Tacoma City Light that year. The towers remained an iconic part of the landscape in Henderson Bay for over 90 years until being replaced by a single pole in 2018.

But while the towers survived for decades, the 1921 Purdy bridge did not. Fifteen years later a new bridge took its place.

And this time it was here to stay.

Part I: The Early Years
Part III: A Design for the Ages

About Ed Ricketts: A Cannery Row Character on the KP (Maybe)

The Fourth Purdy Bridge: A Design for the Ages

A New Day for Lakebay Marina